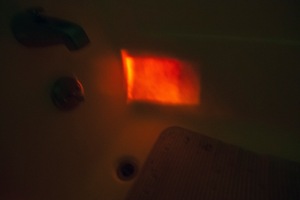 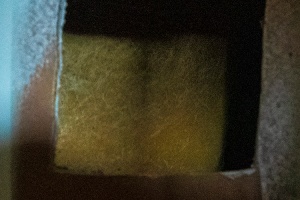 This is a follow-up to my recent post about the strange Light or “thing” in my main bathroom. This morning, I observed the area in the bathtub where yesterday morning I saw what looked like an orange light, and the left photo above shows the photo that I made yesterday morning. This morning I observed the area from time to time during the same period as yesterday – with the lights on and off in the bathroom – and took a shower during the period. I observed no trace of the light during the period, so I continued my investigation.

That led to the discovery that the section of the bathroom wall that I believed to be adjacent to and to run parallel to the wall in the other bathroom, in fact separates the main bathroom from another bedroom – and a clothes closet encloses that section of the wall in the that bedroom. The closet door has been open since plumbers were in the house a few weeks ago. I noticed this morning that the plumbers had cut a nearly-square rectangle in that wall. The right photo above is a high-ISO, low-quality photo that shows the hole in the wall, through which can be seen what I believe is a section of the bathtub. A window on the opposite side of the bedroom wall, which is not covered by a shade, exposes the area of the bathtub shown in the photo to light from an easterly direction.

This new information triggered an hypothesis. I believe that yesterday morning which was bright and sunny during the period of my observations, one or two things (or maybe both) occurred to produce the mysterious light: 1 – the incident light on the outside surface of the bathtub was sufficiently bright to project its image through the wall of the bathtub, or 2 – the incident light heated the wall of the bathtub until it glowed through the bathtub wall. When I came home yesterday at noon, I believe the direction of the sun was such that the light incident on the bathtub was too weak to produce the effect seen earlier, and this morning was overcast and rainy during the period of interest.

I predict that by observing the bathtub in darkness starting near sunrise on a typical sunny day, the light will be observed and will diminish in shape, size and intensity – until it completely disappears as the sun gets higher in the sky. Furthermore, I expect that long-term changes in the light’s size, shape and intensity will be observed as a result of changes in the angular relationship between the sun’s direction and the hole in the bedroom wall – produced by seasonal changes. One important question still nags me a bit: Why have I never noticed the light before? The only answers I can come up with follow: First, I’ve had no reasons to look for the light nor seldom have I had reasons to spend time in the bathroom in darkness. And if even if I had spent time in the bathroom in darkness, the light would have been seen only during specific periods of the day and only if the closet in the adjoining bedroom was open. And finally, I usually shower later than the period of yesterday’s observations. Stay in touch to see how my hypothesis checks out.